You are here: Home / Business Ideas / How to Make Money from Drones
Share via 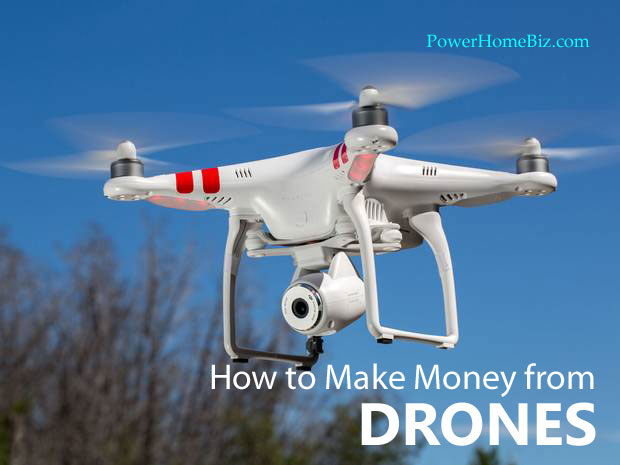 Consumer demand for drones has recently exploded. Drones, technically known as unmanned aerial systems or UAS, used to be an exclusive domain of the military to target enemies, map enemy territories and capture aerial images.

Today, usage of drones in the United States and in other countries has expanded to other facets of everyday life. While still a highly regulated area and commercial applications are still awaiting regulatory approvals, the consumer market has been very enthusiastic about drones and sales have increased significantly. In fact, drones have become one of the biggest selling gift item for the holidays as both adults and kids alike want to get their hands on a drone.

As demand for drones increases, so does its commercial uses and business applications. In short, there is a huge opportunity for making money from drones, even for small businesses.

Here are some ways you can make money from drones:

Manufacturing and creation of drones

The business of manufacturing drones, both for military and civilian use, require substantial investment and capitalization. While the industry is still in its infancy, manufacturing – especially for consumer drones – is expected to see tremendous growth. The current market leader for consumer drones is the Chinese company DJI Technology Co. , whose drone models are carried by Amazon.com and retails for about $500 to $1,250 or more. Even GoPro, whose action cameras are commonly used in drones, is planning to release its own quadcopter drones in 2016.

Despite the high barriers to entry given the investment and patents currently held by these existing manufacturers, there are still opportunities for small businesses. If you are an inventor, you may be able to design a different type of drone targeting a specific user. You may also be able to work as subcontractors for the drone manufacturers. Or you can set up a business that creates specially designed drones configured for specific use – e.g. think of a retailer requiring drones that can deliver certain types of products to customers.

According to the Consumer Electronics Association, roughly 700,000 drones are expected to ship in the United States in 2015, including those who want to purchase drones as a gift. The U.S. market alone will approach $105 million in revenue in 2015, up by 52% from 2014.

There is a huge consumer drone market, such as the hobbyists, do-it-yourselfers, and even kids from the younger ones (5-8 years old) to teens (12-16 years old). There are drone models for kids that can glide on water, detach from a floating base to fly, carry building blocks and other small objects. To capture this market, you can open a store selling drones, whether an ecommerce store or a brick and mortar retail store (or both).

Fighting Walrus has an accessory called iDroneLink™ that plugs onto an iPhone or iPad that allows users to command their drones with a simple touch interface. Together with a companion app called iDroneCtrl, you can command your drone while giving you information such as battery status, GPS location, and autopilot mode.

Other drone accessories include:

Earn money as a Drone Pilot

There are businesses, entrepreneurs or other individuals who may need drones but do not want to buy one or want to learn how to fly one. This represents an opportunity to make money by becoming a trained and experienced drone pilot. Read the article How to Earn Money as a Drone Pilot.

Set up a drone repair shop.

Drones can crash; hit trees or other objects and break down. Drones can also have original parts that don’t work as they should such as faulty transmitters. One big opportunity for small businesses is to open a repair shop for drones. You can choose to have a storefront or open a repair shop online where customers mail their drones to you for repair.

Be sure that you have drone technicians, access to the software needed to run drones, and an inventory of stocked parts. Clarify the types and models of drones that you can fix, turnaround time, service fees and what’s included in the fees, the cost of the replacement parts, and other charges. Be professional and courteous in handling customer issues and clarify expectations of when their drones can be fixed. If you are out of the spare parts needed, check if the customer is willing to buy that part and have it shipped to you so it can be put into their drones.

Write books or e-books on drones.

You can also choose to earn money by packaging together with your tips or information to drone hobbyists and other users into e-books or books. If you have an information website, a natural offshoot would be to package the content of the site into an ebook.

Do a search on Amazon to see the kinds of books available on drones. A cursory search shows a number of books targeting the beginners, such as:

Pay attention to the comments on the existing books to see what readers are looking for but find missing in the available books or ebooks. This little exercise can give you ideas of what you can write about in order to find an untapped niche in the book marketplace.

Another way to earn money is to start a business that provides products or services that support drone users.

One example is the company Information Processing Systems of California  that markets mobile control centers to control and monitor drones. They are selling vans equipped with security cameras, sensors, radar and communication infrastructure outfitted with trailers to carry drones. Their target market, however, includes law enforcement and rescue workers.

Drone pilot training has existed for a long time in the military. As more and more civilians use the drone, there is a need for hands-on training that helps develop qualified non-military pilots. Instead of using the drone for military tasks as surveillance, the civilian pilot training should focus on developing an understanding of drones as applied to civilian uses. Given that the regulations for civilian uses of drones are still in its infancy, there really are no testing standards for drone pilots.

The Homeland Surveillance and Electronics LLC in Colorado offers civilian/commercial UAV pilot training focusing on how to use drones for businesses involved in farming, real estate, aerial photography, construction, news media, among others.

Instead of a hands-on personal coaching, you can instead package an online training course. One example is UAV Coach http://learn.uavcoach.com/ which offers an $89 online course designed for beginner drone users and those who intends to make money as a pro drone pilot.

Create and earn money from videos

You can also make money by creating videos taken by your drone, or videos of you playing with your drones. There are a number of drone models that are equipped and set up with a video camera. While some of these drones are less than $100, you need to invest in drones with excellent cameras if you want to use that as your money maker.

For ideas of what videos you can produce, here are some of the topics of the drone videos currently on Youtube:

You can then sell your video footages, or post them on Youtube and earn advertising money. For ideas on how you earn make money from videos created with drones, read the article 8 Ways to Earn Money from Online Videos.

One of the best commercial uses of drones is delivery of products. Amazon.com has announced plans to use drones to deliver their packages through its program Amazon Prime Air. Domino’s Pizza in United Kingdom has released a video testing the delivery of pizzas using specially-created drones. While the U.S. Federal Aviation Administration has not approved using drones for delivery, big businesses such as Amazon have been campaigning to get approved.

But there are small businesses who are at the cutting edge and have been testing the use of drones to deliver products. Take for example Manayunk Cleaners in Philadelphia, Pennsylvania. Its owner, a drone-enthusiast, converted his drone to carry dry cleaned shirts. It takes two people to operate the drone (spotter and a pilot), which then delivers the shirt to the customer. Uploading the video of the stunt generated significant buzz to the dry cleaning business.

You can make money from selling stock photos of drones as well as images taken by drones. There are many types of drones equipped with cameras, and there are good ones that can take exceptional photos. Drone photography has come a long way that even National Geographic sponsored a drone photography contest covering different categories such as nature, places and “dronies” or selfies from an aerial view.

Another way to earn money is to create a marketplace where you offer drones for short term or special projects, as well as to do specific tasks. You will offer drones for rent together with experienced pilots to maneuver the drones and operate them safely. A company called Skycatch https://www.skycatch.com/workmode/ has a program called Workmode that bills itself as “Uber for drones” where users and businesses can rent drones and experienced pilots. Drones can also be useful in a construction project, such as overseeing how quickly work is being done, checking to see if the project is on schedule or even monitoring how much dirt has been removed from the construction site.

Create a marketplace for drone enthusiasts.

You can create a place where drone hobbyists and congregate and do buy and sell parts, services, and other items. Do something like a Craigslist, but focusing on drones! This could be an online destination where users can sell their older drone models, as well as those looking to buy second-hand models of drones.

The best part about drones? They are still so new that we may probably be doing things that we don’t know it could today. So keep your eyes open for new opportunities from drones!

Jenny Fulbright is a writer for PowerHomeBiz.com.

The coronavirus or COVID-19 pandemic has adversely affected the lives of many in ways we’ve never expected. Here are some articles to help your small business survive these trying times, and the possible recession that may follow, … END_OF_DOCUMENT_TOKEN_TO_BE_REPLACED

Have you ever dreamed of starting your own small or home business, but don't know what business to start? There are many types of businesses that you can do from your own … END_OF_DOCUMENT_TOKEN_TO_BE_REPLACED