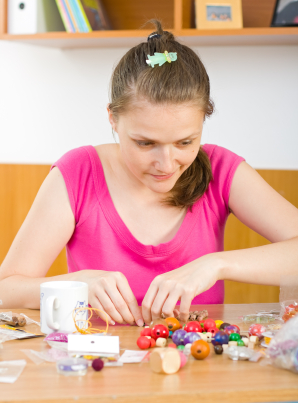 It’s great to delve into an interesting hobby such as artwork, photography, or crafting paper jewelry. It’s even more exciting (and financially rewarding) to turn your special talents into a successful home-based business. That’s exactly what Mary Maturi of Cleveland Ohio, Leslie Croyle of Bay Village, Ohio, and Marlene Stephenson of Virginia, Minnesota, did. Each turned her hobby into a cash-generating business complete with paying customers and a bank account.

These aren’t isolated stories. Men and women across the country are joining the ranks of entrepreneurs converting hobbies into money-paying propositions. It’s important to note that none of these women originally planned to start a business. On the contrary, interest by others in their hobbies convinced them to sell their work.

Mary Maturi markets a line of “Killer Whale” petroglyph tee-shirts, sweat shirts, and note cards both in Alaskan gift shops and in natural history museums in the lower forty-eight states.

It all started when Mary and her family spent a year living in Wrangell, a small town located on Wrangell Island in southeast Alaska. One day Mary ventured down to Petroglyph Beach on the island. Petroglyphs are ancient rock carvings left by an unknown people. Using rice paper and different colored ferns, Mary “rubbed” the petroglyphs to capture their images on paper. When others saw her rubbings, they offered to buy them.

“Peoples interest really surprised me, so I thought of other ways to share the uniqueness of the petroglyphs with out having to deal with their awkward size (some were several feet in length). That’s how the “Killer Whale” notecards were born,” Mary says. Using her rubbings as a guide, she created smaller scale pen and ink drawings which she took to a printer to get price quotes for paper, printing and envelopes.”

The major cost of printing is making the plates. Therefore, it’s wise to get price quotes for different runs of 1,000,” says Mary. For example, a run of 3,000 cards might cost around 10 cents per card while a run of 6,000 note cards could drop that per unit cost below 8 cents per card. That decreases your card cost by more than 20 percent – quite a savings. Mary also recommends getting bids from several suppliers or even splitting up the order.

While printers know how to price their printing competitively, they don’t make their own envelopes. Mary uses the least costly printer that can deliver the quality of paper stock she desires, but buys her envelopes from a warehouse specialist at a savings of nearly 35 percent from prices quoted by printers and other envelope suppliers. It pays to let your fingers do the walking and get competitive quotes.

Once Mary obtained the cost estimates, she visited several gift stores and museums to gather pricing information on competing notecards. She also talked to store owners and museum managers to determine their interest in ordering. After all, it would make no sense to have the notecards printed unless buyers would purchase at prices that can generate a profit.

Leslie Croyle converted her love of photography and knack for framing into a full-fledged photo decorating business.

Leslie and two friends offered for sale enlarged photos of popular Cleveland events such as the start of the Revco-Cleveland Marathon & 10K, and a spectacular shot of the United Way Kickoff’s release of thousands of colored balloons in Public Square.

“We hired several photographers to cover the events and used the best photographs of the bunch,” say Leslie. Advertisements for photo promotion proved popular. The trio sold 600 photos at prices ranging from $8 to $10 a piece, gathering a bit less than $5,400 in revenues. Not bad for the first venture. Unfortunately, the combined costs of ads, fees for the photographers ate up the $5,400 and more. “Although we ended up with a loss, it gave us a lot of market exposure and a proven track record,” says Leslie.

Next, Leslie and her friends put together a portfolio of photographs and contacted local businesses. This marketing move landed them a job of photo decorating PJ McIntyre’s Restaurant in a Cleveland shopping center. “We tied in the nostalgia theme of the restaurant by contacting area historical societies and arranging to have their vintage photographs copied. It’s important to make sure you have the right to reuse the prints. Ask for proper releases and permission to use whatever photos you have copied,” advises Leslie.

She stresses the importance of networking industry contacts. A decorating firm they worked with on one project led to additional work when that firm recommended Leslie and her partners to some of their other clients.

Since 1987, the photo decorating business has progressed well since its initial unprofitable photo event ventures. Major projects include photo decorating the guest rooms and suites for the historic Glidden House, which has been made into a unique bed and breakfast, and an all-sports photo motif for the Grand Slam Bar & Restaurant in the refurbished Cleveland Flats night spot area.

“From our humble beginnings, we’re now getting into some pretty good sized jobs,” says Leslie. “Just keep bumbling along – don’t give up.”

Marlene Stephenson makes her money tearing paper. Actually, her unique sculptured jewelry draws rave reviews wherever she wears it. In fact, people routinely ask to buy her unique designs right off her dress when she appears at public functions.

Marlene is a medical technician by trade, and her paper profits grew out of a coffee get-together group of friends that met once a week to try their hands at new craft ideas. One day one of the ladies brought a book on making paper jewelry. “I just fell in love with it and made a pin and some earrings to wear to a business meeting. Lots of the women at the meeting asked me to make some for them also,” says Marlene.

As with any fashion item, Marlene pays attention to color schemes and design. Even though she makes several copies of different designs, each is unique in color, shading, size, and even texture. Marlene crafts her one-a-kind jewelry to match her customers special outfits.

“With any small business, it’s important to link up with other small businesses,” stresses Marlene. For example, her local hairdresser lets Marlene display her paper jewelry at her shop. Local gift stores either buy the pins and earrings outright or take them on consignment, which means they pay for the items after they sell. Marlene also teamed up with several other artists to display their work at trade shows.

“Try to tailor your product to the particular market. With the loon as the state bird of Minnesota, my loon pins always do well at local craft shows,” she says. Likewise, when Marlene sent samples of her pins to trade show in Anchorage, Alaska, she made some new designs to capture the wilds of Alaska, These pins included a polar bear, Alaska wild flowers, whales, and fish.

What ever your own hobby pursuits, you may be over looking an opportunity to turn personal interests into money-making enterprises. Investigate the possibilities, calculate the costs, analyze the market, and move forward with your plan of action. Take your lead from these three women who have turned hobbies into profits.
Read the following articles on how to make money from your hobby: