You are here: Home / Leadership / Personal Development / Private Victories: Towards Achieving Your Long-term Goals
Share via 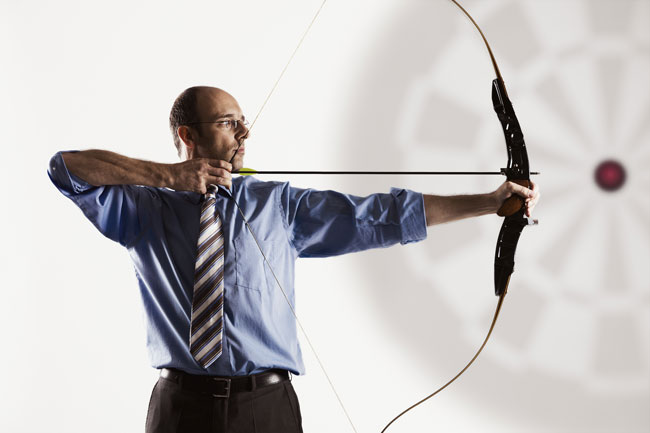 Did you watch the Olympics? Being a champion athlete or a successful entrepreneur requires a combination of “Keeping Your Eye on the Prize” while remembering to rejoice in small gains and to learn from your mistakes. No athlete ­ or entrepreneur ­ starts out with all the skills necessary to be at the top of their game.

RELATED: Prepare Like an Olympian for the Challenges of the Business World

I was reminded of this recently while watching the Olympics on TV. The biographical sketches dramatize the challenges competitors face as they prepare for their final showdowns. These athletes epitomize ambition and devotion to doing what it takes to be at the top in their sports.

Nobody is born with the ability to efficiently jump over the high hurdles and speed down the track ­ to the next hurdle. Skills such as figure skating, starting, running, timing and jumping have to be developed. Each component has to be practiced, honed, and mastered over time and blended into a fluid succession of movements that eventually becomes automatic.

During training, athletes practice their event thousands of times until it becomes fine tuned and reflexive. They also have to develop reliable methods to get themselves into the right frame of mind. Being able to reliably perform in this way is called mastery.

Each time the athlete improves some component of the performance there is a feeling of joy and personal satisfaction for the accomplishment. It may be as simple as having the foot aligned in a particular way while going over the hurdle. But the athlete rejoices in the refinement, knowing that it is a step toward an even faster time.

A common pitfall for ambitious entrepreneurs is to be so focused on external results that the process of developing the skills that are necessary for success ­ training ­ becomes a source of stress.

When you shift your focus to appreciating the process and valuing the small skill gains throughout the day, the enhancement in your attitude, satisfaction, and performance can be dramatic. 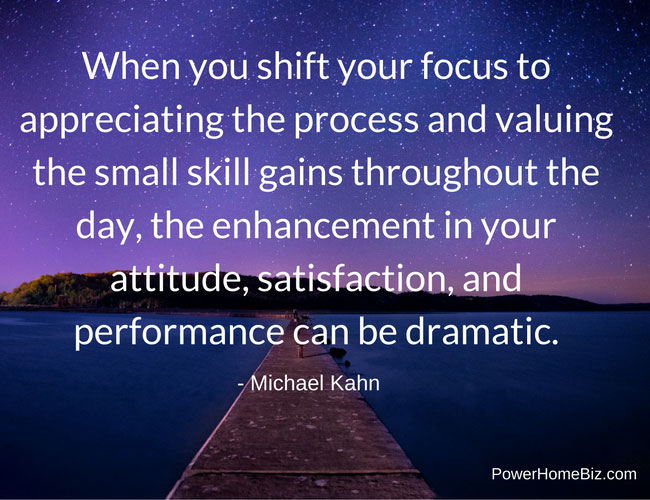 One coaching client, George, wanted help in getting better organized in his business. Frustrated with his failure to meet his own unrealistic time goals, he often felt tense and irritable. Soon he began dreading work. This was alarming since he had started the business to get out from under corporate controls. He wanted to have more freedom and opportunities for creativity. He wanted more enjoyment from his work and believed that being his own boss was the solution.

RELATED: 10 Tips for Creating Positive Momentum to Achieve Your Goals

For a couple of months, we worked on developing planning strategies. In each session, we reviewed George’s previous week’s work. Initially, he had trouble seeing progress because of focusing on the end results such as the number of new customers and contracts.

He was helped to shift his focus to process: how he was approaching the task. He started noticing and enjoying that when he planned better, he took a more systematic approach to preparing bills, a task that previously felt like a time waster. Then he began noticing that he felt less tension in his back while working on the bills. Soon he observed that he was also less irritable. Then he discovered that he had more energy for other tasks afterward.

It is noteworthy that each change George made may have been imperceptible to an outsider or may have seemed insignificant. But George knew that each improvement in how he approached tasks and each decrease in distress was a private victory.

Each evening George took 15 minutes to identify three private victories for the day. For example, one evening he took delight in:

Each private victory helped him derive a deeper sense of satisfaction in the day because he was seeing progress in his ability to function optimally and felt more confident that he was moving toward his long-term goals.

Recommended Books on Private Victories: Towards Achieving Your Long-term Goals:

Article Name
Private Victories: Towards Achieving Your Long-term Goals
Description
When you shift your focus to appreciating the process and valuing the small skill gains throughout the day, the enhancement in your attitude, satisfaction, and performance can be dramatic. Celebrate your private victories as a step to helping you achieve your long-term goals.
Author
Michael H. Kahn

The coronavirus or COVID-19 pandemic has adversely affected the lives of many in ways we’ve never expected. Here are some articles to help your small business survive these trying times, and the possible recession that may follow, … END_OF_DOCUMENT_TOKEN_TO_BE_REPLACED

Have you ever dreamed of starting your own small or home business, but don't know what business to start? There are many types of businesses that you can do from your own … END_OF_DOCUMENT_TOKEN_TO_BE_REPLACED