You are here: Home / Marketing / Branding / Lessons from New Coke

April 23rd was a quiet day in the Spring of 2008, a nice day; but April 23 became a day that will live, as FDR put it, in infamy —at least from a marketing and public relations point of view. It was the day Coca-Cola introduced New Coke. It is nothing new to say that you need to protect the image of your brand, but that lesson was driven home with uncommon power —- and violence —- by the debacle that was New Coke. 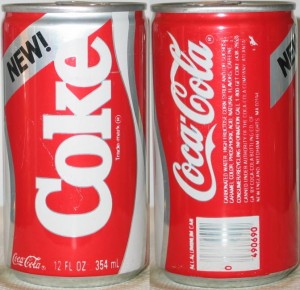 Coca-Cola has been around since 1886, when Dr. John S. Pemberton, an Atlanta, Georgia, pharmacist, first produced the syrup for Coca-Cola. He took a jug of the syrup to the nearby Jacobs’ Pharmacy, where, according to Coke lore, “it was sampled, pronounced “excellent” and placed on sale for five cents a glass as a soda fountain drink.” In the years since then, Coke went from a syrup mixed with soda water to a bottled beverage that could be easily distributed throughout the region, then the country and finally the world. Throughout this period, the message was clear: Accept no substitutes, drink only the real thing. In fact, “The Real Thing” became one of Coca-Cola’s trademark phrases and its most recognizable tagline. It was also something that would come back to bite the company and its executives.

Coca-Cola’s greatest challenge was its arch-rival, Pepsi. Just after World War II, Coca-Cola held a 60% market share, but under intense competitive pressure from Pepsi, that market share had dropped to 24% by 1983. Beginning in the 1970s, it became more and more evident that the American public was growing more interested in sweeter soft-drinks. The Pepsi Challenge, blind taste tests between Coke and Pepsi held in public places, demonstrated the point since the results were overwhelmingly in favor of Pepsi. What’s more, the introduction of Diet Coke, sweetened with aspartame (Equal, NutraSweet) showed Coke executives that a sweeter formulation was in order and extensive market research supported that conclusion.

The key to this research was the top-secret “Project Kansas,” headed by marketing vice president Sergio Zyman and Brian Dyson, president of Coca-Cola USA. They sent the marketing department out with samples and surveys. The results of Project Kansas taste tests showed that:

The high fructose corn syrup formula tested much better than either Coke or Pepsi.
The majority (88%) of tasters said that they would buy and drink this if it were Coke but that they would need to get used to it.
12% of the tasters were angry. Resenting the change, they said that they might stop drinking Coke entirely.
The surveys were actually far more positive and their results led to the decision to change to a sweeter formula. This was fine with Coca-Cola CEO Roberto Goizueta. While in charge of Coke’s subsidiary in the Bahamas, he had improved sales by adjusting the drink’s flavor. This success led to his belief that a change to the taste of Coke could increase profits. No one paid attention to the clue offered by that angry 12% among the tasters, a decision that would have great consequences in the months and years ahead.

So, Coca-Cola management went ahead with the plan. That sweeter formulation, made to go along with the success of the sweeter Diet Coke (which had edged 7-Up out of its place as the Number 3 soft drink), became New Coke.

The Introduction of New Coke

April 23, 1985, New Coke was introduced to the world at a Lincoln Center press conference in New York City. It was a day that Goizueta and the other executives that mounted the stage had high hopes for. They were about to overturn a century of tradition—the formula had changed from time to time over the years but it had never been completely changed before—and the press, with many questions provided by Pepsi, wasn’t about to let them off easy.

They didn’t. The questions were demanding and the answers considerably less than stellar. Goizueta’s attempt to describe the new flavor was ridiculed in the press as well as the industry as a whole, especially since he was one of the companies best flavor chemists. In the end, they were just happy to have it over and done with. Other events and give-aways followed and pretty soon the customers were back and sales even started to go up. In spite of the rocky start, it looked as if it was working.

Up to this point, Coke seems to have done everything right. They had recognized industry trends, examined the success of their chief rival, conducted extensive market research, prepared a massive public relations and marketing effort and it all indicated that New Coke should be a big hit.

The research from Project Kansas indicated great support for the new formula, but it also registered a small but vocal opposition. In light of the overwhelming positives, this segment was ignored. That was a mistake since it indicated the possibility of a major backlash among consumers, which is precisely what happened.

After early acceptance among consumers nationwide, the backlash came. Centered in the Southeast, where Coke got its start and where it still is a cultural icon, resistance to the new formula soon spread across America. Some of the highlights of this backlash include:

With chaos within its consumer base and Pepsi working hard to take full advantage running ads (such as the one where a first time Pepsi drinker exclaimed “Now I know why Coke did it!”), Coca-Cola executives were in a panic trying to figure out where they went wrong. By May they were discussing the reintroduction of the original formula and when the June sales figures came out and showed a leveling off of sales, there was real fear that profits would fall. Pepsi’s gains were, however, very small. The fact was that alienated customers didn’t switch to Pepsi, they simply refused to buy New Coke.

It didn’t take long for it to become chic to hate New Coke, and the peer pressure coming from that new social aspect was devastating. The executives at Coca-Cola knew from positive letters and calls that new formula did actually have a following among consumers, but they were like Nixon’s “silent majority” and said very little in the face of the loud, strenuous condemnation. According to Don Keough, the President and Chief Operating Officer at the time, he overheard the following conversation at an Atlanta country club:

By June 23rd, it wasn’t a question of “if” they would go back to the original formula, but “when.”

Going Back to The Real Thing: Coca-Cola Classic

On June 11, 1985, less than three months after the introduction of New Coke, the Coca-Cola company announced a return to the original formula. It is a reflection of the power behind the feelings of the people that Peter Jennings interrupted ABC’s regularly scheduled programming to announce the news and Senator David Pryor brought attention to it on the Floor of the Senate, referring to the reversal as “a meaningful moment in U.S. history.”

New Coke continued as Coca-Cola while the original formula—now based on high fructose corn syrup instead of sugar cane—was called Coca-Cola Classic. By 1992, the new formula was marketed as Coca-Cola II and after a while it was taken off the shelves here in the United States (it lasted in certain areas around Chicago until 2002). It has, however, a following in certain foreign markets. In 2006, Coke II was still selling in Micronesia, American Samoa and French-speaking Quebec, Canada.

“There is a twist to this story, which will please every humanist and will probably keep Harvard professors puzzled for years,” said Keough at that July 11th press conference. “The simple fact is that all the time and money and skill poured into consumer research on the new Coca-Cola could not measure or reveal the deep and abiding emotional attachment to original Coca-Cola felt by so many people.”

Coke spent over $4 million and came close to losing their business altogether just to learn the lessons of New Coke, all of which can be summed up in the advice of Polonius to his son, Laertes, in Act I, Scene III of Shakespeare’s Hamlet:

This above all: to thine ownself be true,
And it must follow, as the night the day,
Thou canst not then be false to any man.

For a century, Coca-Cola had developed its following on being “The Real Thing.” Yet, when they felt the pinch from Pepsi—a pinch that had more to do with its merger with the Frito-Lay company and the benefits of the new distribution channels and shelf-space agreements that came with it than direct soft drink competition—their executives didn’t stand on the quality of their product, they decided to change it. They were not true to themselves, true to their customers, true to their brand or true to their product. Perhaps, they thought that they were being true to their stockholders, but in the end it really doesn’t matter what they thought they were doing or being. What matters is the fact that they had the most recognizable product in the world and they decided to change it to make it more like the competition.

When you take your products or your services and make them more like your competition, what does that accomplish? If it is a long-standing brand, it leads to trouble with your market. However, it leads to more than that. It removes any real difference between you and your competitors. In the days of New Coke, I switched between New Coke and Pepsi without a thought since to me there was no discernable difference between them. I no longer cared, the only question I had was, “which one is on sale?”

Your brand is important to you. It is your name in the marketplace, your reputation among your customers and it represents what sets you apart. These things make it valuable and deserving of your attention and protection. In their panic and zeal, the executives at Coca-Cola forgot that and it cost them a lot of money and even more prestige. How much would it cost you if you were to forget?

To thine ownself be true!

The coronavirus or COVID-19 pandemic has adversely affected the lives of many in ways we’ve never expected. Here are some articles to help your small business survive these trying times, and the possible recession that may follow, … END_OF_DOCUMENT_TOKEN_TO_BE_REPLACED

Have you ever dreamed of starting your own small or home business, but don't know what business to start? There are many types of businesses that you can do from your own … END_OF_DOCUMENT_TOKEN_TO_BE_REPLACED