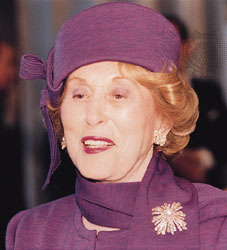 Estee Lauder is known to have started her cosmetics business selling her uncle’s Six-In-One cream in 1924. She was introduced to the cosmetics business through her uncle Dr. Schotz, a chemist. His business, New Way Laboratories, was founded in 1924. There were many other chemical products that Dr. Schotz made but Lauder concentrated on several beauty treatment products. She helped her uncle out by selling products with names like Six-In-One Cream and Dr. Schotz Viennese Cream.

After getting married and re-married to same person in 1942, Lauder vowed to direct her
Energies to selling her uncle’s cosmetics products. She continued selling them, also setting up her own office at 39 East 60th St. in February 1944.

She and her husband continued to make their creams in their factory – a converted restaurant – and Estee Lauder Inc. was formed in 1947. Their initial breakthrough came after they won a concession from Saks Fifth Avenue to sell their cream in 1948. After the initial products sold out in only two days, their path was set.

The product that put Estee Lauder firmly on the map came with the introduction of Youth Dew in 1953. At the same time it was bath oil and a perfume (retailing at $8.50) and sold over 50,000 units in the first year.

Explaining her success, she said, “I have never worked a day in my life without selling. If I believe in something, I sell it, and I sell it hard.” This attitude, together with an uncompromising belief in her product and the beauty in all women, made Estee Lauder a respected household name.

Estee Lauder died April 26, 2004, but her contribution is remembered. Today, Estee Lauder is a recognized brand name in over 118 countries with over $4.0 billion in annual sales and her family’s shares are worth $6 billion. Her company might never have set a trend, but they weren’t ever left behind.

Book Description from Amazon.com: Like the Empress and Queen who names she bears, Estee Lauder (born Josephine Esther Menzter) reigns supreme with a firm and strong hand. Her rise from unknown to Queen of Cosmetics is told in a lively fashion with her youthful fascination with beauty to her first forays in beauty salons to her acceptance by the major department stores. It seems that through the sheer force of her personality and handful of potions, Estee Lauder would convert even the most stubborn persons to ardent Estee Lauder devotees whether it was in the beauty salon, office or elevator.

A favorite story is Estee slipping off her heels after an extremely busy sales day at a department store and going over the accounts. Realizing she is two dollars short of her $1000 sales goal and with a few moments before the store officially closes, Estee slips back on her shoes and springs into action, selling enough product to bring her total day’s sales to the desired $1000.
One shortcoming of the book is Estee Lauder’s decision to not give dates of events unless absolutely necessary. We know when Youth Dew is introduced and the official founding of Estee Lauder but otherwise Estee remains mum. She does mention in the introduction to the book the debate over her age but does not settle the matter one way or another. One can understand her desire to be an ageless woman. The image of a cosmetics queen is one of eternal youth and beauty. Her fellow Cosmetic Queen Mary Kay Ash also did a little dance around her true age with her memoirs.

For the Estee Lauder devotee or even a student of fashion and cosmetics “Estee: A Success Story” is a must read.

Book Description from Amazon.com: More than a string of fact and dates, the Essential Lives series reveals the influences that shaped each individual and how, in turn, each individual shaped American history. Complemented by archival photos and clear narration, these biographies begin with a snapshot in time to pique interest before continuing along with chronological coverage. Estée Lauder follows a young Josephine Esther Mentzer, the daughter of Jewish immigrants, who combined her personal interest in beauty care with skin cream she learned to make in her chemist uncle’s lab. After changing her name to Estée Lauder, the hardworking and determined entrepreneur created a marketing style that turned her home business into a global corporation. This series does an excellent job of depicting each individual as a nuanced human rather than an icon.