You are here: Home / Leadership / Success Tips / Barbara Miller: It’s Never Too Late to Start a Business
Share via 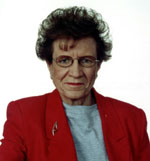 It is never too late to become an entrepreneur.

While some people start their entrepreneurial endeavors at a young age, others begin late in life, just when traditional conventions dictate that they should retire and take life a little more easily. One thing is sure, though: no matter what age you start, you need to be tough to succeed as an entrepreneur.

Barbara Miller, founder and President of the Miller Paper Company based in Amarillo, Texas, is toughness personified. If there is any phrase that can aptly capture the spirit of Ms. Miller, it is this old adage: “When the going gets tough, the tough gets going.”

For Ms. Miller, the going got about as tough as it ever does – losing a job, starting a business, and winning her bout with cancer – all of these after she reached the age of 60. Despite all adversities, she certainly got going. She transformed the corporation that she started from a nondescript start-up to a multi-million dollar company in just a span of five years.

It’s Never Too Late to Start a Business

Being an entrepreneur was not foremost in Barbara Miller’s life. In fact, she spent the most part of her life as an employee, working for various corporations in the paper industry.

However, an unexpected twist of fate led her to shift gears away from the relative comforts of being an employee to one at the helm of her own ship. “I have been in the industry for more than 30 years,” said Ms. Miller. “A situation came about that several of us employees were shoved out the door. We decided that if we’d want a paper company, we’d get on with it. So we just literally opened up overnight.”

With her former colleagues joining her, Ms. Miller pulled her resources together to start her own company. Miller Paper Company opened its doors in January 1995 with 15 employees. The company, based in Amarillo, Texas, is now a leading wholesale distributor of paper and related products in the Midwest.

At her ripe age and after four grandchildren, Ms. Miller has proven that it’s never too late to jumpstart an entrepreneurial career.

The Fight of Her Life

Her greatest start-up challenge was not raising capital, nor finding a strong management team. Rather, it was her health.

Five months after opening the business, Ms. Miller was diagnosed with ovarian cancer. Lesser mortals would have been crushed, but not Ms. Miller. She remembers her surgeon reassuring her son with the words: “She’s a tough old bird, she’ll make it.”

Luckily, the disease was caught in its early stages. She had surgery to remove the cancerous growth. “After that surgery I had chemo, and bone marrow transplant afterwards in 1997,” said Ms. Miller.

How did this affect the business? Ms. Miller credits her team for keeping her vision going. “People who work in this company are just outstanding individuals. There were absolutely no problems; they know what they’re doing. They just carried on!” During this time of crisis in her life, she continued to provide outstanding leadership to her business and remained very active in her civic involvement.

Her bout with cancer was a major turning point in life. Even her doctor did not imagine that Mrs. Miller would soon be at the helm of a multi-million dollar corporation boasting a twenty percent annual growth rate.

Founded with an initial capitalization of $300,000, Miller Paper Company generated almost $3 million in sales in its first year. “In 1999, we sold over $7 million, and we’ve enjoyed an average growth rate of 20 percent. Our performance has been outstanding for our industry. We’ve really been blessed,” said Mrs. Miller.

Miller Paper Company now occupies a 50,000 square feet warehouse with 33 employees and catering to just about every industry imaginable. “We carry office supplies of all kinds, towels, toilet, tissues, cups, packaging material, among other things,” reports Mrs. Miller. Maintaining such a wide target group by means of a diversified product line certainly bolsters sales and ensures that the orders keep flowing. “We cover everything from prisons to beauty shops,” Mrs. Miller stated proudly. “As long as a business is open and in business, they need our products.”

The scope of the business has grown to cover the Panhandle of Texas, New Mexico and Oklahoma, basically about 150 miles radius from Amarillo. Through “aggressive marketing and sales people, just out in the streets making calls,” Mrs. Miller has been able to spread the word about the company. “We’re fairly aggressive because we now have 15 salesman going out there to get business every day,” she added.

From the beginning, she focused her energy on growing and expanding, either by introducing new products or increasing the sales area. “We are constantly working on expansion one way or another. We expand by covering additional territories or we expand through adding new product items. We’re constantly doing both of those things,” she said.

In May, Ms. Miller will explore a whole new medium by putting her company on the Internet. Using the web site address http://store.millerpaper.com/, she reported that the web presence is something being worked on right now. “We should be up and running by May,” she claimed. The web site will allow customers to order online.

This year, the company will celebrate its fifth birthday with the Small Business of the Year Award. “The award’s criteria was growth, staying power and surviving adversities and supportive of the community – and Miller Paper was a shining star is all these areas,” beamed Ms. Miller. Despite the significant time devoted to the business and undergoing treatment for cancer, Ms. Miller has been actively involved in community activities.

No stranger to excellence, Ms. Miller has received various prestigious awards for both her business acumen and community involvement. In 1998, she received the Sam Walton Business Leader Award, while Miller Paper was named one of the nation’s fastest growing businesses by Dun and Bradstreet in 1997. She was elected Vice Chairman of the Amarillo Chamber of Commerce Board of Directors in 1999 and is Chairman Elect of the Chamber Board. Her volunteerism includes the Amarillo Women’s Network, Amarillo Executive Women, among others.

“I am very humbled and feel highly honored to receive this recognition,” says Miller on her SBA Award. She credits her success to her employees. “The team at Miller Paper, 30 full time and three part time associates, are what makes Miller Paper and Barbara Miller outstanding in the eyes of others.”

So what is the secret behind Miller Paper’s rapid rise? Ms. Miller credits the sense of teamwork and camaraderie among her employees as instrumental to her company’s success. She acknowledges that she has “a lot of influence” on the company, but she credits her employees, whom she calls “good people who just know what to do.”

“The secret is to have good people who knows what to do and let them work,” claimed Miller. “The strength of Miller Paper comes from the close teamwork and attitude, the employees. We’re kind of like a small family. Everyone looks out for our fellow worker.”

Her advice to would-be entrepreneurs? “Find a niche that put your customer needs first and take care of their needs. Integrity and treating people just exactly as you would like to be treated,” says Mrs. Miller. “Make your customer feel very important – because they are! If you lose them, you’re out of business. Just integrity and pay your bills.”

Ms. Miller is a remarkable woman who showed that retirement could mean starting a multi-million dollar business. “You take good people and just pat ‘em on the back and let ‘em know you’ll support them, and turn them loose and its amazing what they can do.”

Barbara Miller certainly has proven just how amazing it can be.

Article Name
Barbara Miller: It's Never Too Late to Start a Business
Description
Barbara Miller is a remarkable woman who proved that it is never too late to start your own business. A grandmother of four past her retirement age, she transformed a paper distribution company to a multi-million dollar venture despite personal setbacks and difficulties.
Author
Lyve Alexis Pleshette

The coronavirus or COVID-19 pandemic has adversely affected the lives of many in ways we’ve never expected. Here are some articles to help your small business survive these trying times, and the possible recession that may follow, … END_OF_DOCUMENT_TOKEN_TO_BE_REPLACED

Have you ever dreamed of starting your own small or home business, but don't know what business to start? There are many types of businesses that you can do from your own … END_OF_DOCUMENT_TOKEN_TO_BE_REPLACED